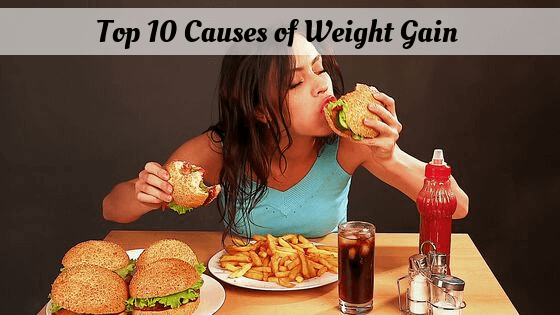 Obesity is one of the biggest health problems now days. This is associated with several related conditions, collectively known as metabolic syndrome. These include high blood pressure, raised blood sugar and a poor blood lipid profile. People with metabolic syndrome are at a much higher risk of heart disease like heart attack and type 2 diabetes, compared to those whose weight is in a normal range. Over the past decades, much research has focused on the causes of obesity and how it could be prevented or treated.

Here are 10 causes that are leading causes of weight gain, obesity and metabolic disease:

1. Genetics: Obesity has a strong genetic component. Children of obese parents are much more likely to suffer with obesity than children of lean parents. That doesn’t mean that obesity is completely predetermined. What you eat can have a major impact on which genes are expressed and which are not.

2. Processed Junk Foods: Heavily processed foods are the refined ingredients mixed with many additives. These products are designed to be cheap, long lasting on the shelf and taste so incredibly good that they are hard to resist and causes overeating.

3. Food Addiction: Many sugar-sweetened, high-fat junk foods stimulate the reward center of our brain. In fact, these foods are often compared to commonly abused drugs like alcohol, nicotine, cocaine and cannabis. Junk foods can cause addiction in susceptible individuals.

4. Aggressive Marketing: Junk food manufacturers are very aggressive marketers. Their tactics can get unethical at times and they sometimes try to market very unhealthy foods. In today’s world, children are becoming more obese, diabetic and addicted to junk foods long before they're old enough to make informed decisions about these things.

5. Insulin: Insulin is one of the important hormone that regulates energy storage. One of its functions is to convey fat cells to store fat and to hold on to the fat they already carry. The Western diet promotes insulin resistance in several overweight and obese individuals. This raises insulin levels all over the body, causing energy to get stored in fat cells instead of being available for use.

6. Certain Medications: Many pharmaceutical drugs can cause over weight as a side effect. For example, antidepressants have been linked to modest weight gain over time.

7. Leptin Resistance: Leptin is another hormone that plays very important role in obesity. It is produced by fat cells & its blood levels rise with higher fat mass. For this reason, leptin levels are especially high in people with obesity.

8. Food Availability: Another factor that affectedly influences people’s waistline is food availability. Especially junk food, is everywhere now. Shops display mouth-watering foods where they are most likely to gain your attention.

9. Sugar: Added sugar may be the single worst aspect of the modern diet that influences the obesity. That’s because sugar changes the hormones and biochemistry of your body when consumed in excess amount. This, in turn, contributes to weight gain.